Imagine a world that is wild, untouched and so remote that it is one of the least inhabited areas on Earth. A world that is home to a group of people that have developed a unique relationship with one of the world’s most revered birds of prey, the Golden Eagle. This is the world of the Kazakh Eagle Hunters, who not only survive in this amazing landscape but who have developed a wonderful relationship with eagles to hunt with them for prey, including rabbits and even foxes.

Deep in the rugged hills of the Altai Mountains region of western Mongolia, live a group of hunters with an extremely rare skill of hunting small mammals with golden eagles. These are the ‘Kazakhs’. The Kazakhs are the descendants of Turkic, Mongolic and Indo-Iranian indigenous groups and Huns who populated the territory between Siberia and the Black Sea. For more than 4000 years, nomadic tribes of the Altai region have trained their young men and women in the ancient Mongolian art of golden-eagle hunting and have developed and nurtured a special bond with golden eagles for centuries. The ancient art of eagle hunting is one of the many traditions and skills that the Kazakhs and the Kyrgyz in contemporary Kazakhstan and Kyrgyzstan have held onto for the last decades.

Hunting with eagles is a traditional form of falconry found throughout the Eurasian Steppe, practiced by ancient Khitan and Turkic peoples. Today it is practiced by Kazakhs and the Kyrgyz in contemporary Kazakhstan and Kyrgyzstan, as well as diasporas in Bayan-Ölgii Provinces Bayan-Ölgii, Mongolia, and Xinjiang, China. Though these people are most famous for hunting with golden eagles, they have been known to train northern goshawks, peregrine falcons, saker falcons, and more. They don’t hunt eagles, but rather use the revered golden eagle as their tool and form a close bond with the bird of prey along the way.

Historically, the golden-eagle hunters known as ‘Burkitshi’ have been male, as the age-old art was traditionally handed down from the father to the son. However, in recent years, very few courageous women have developed this skill. Today, there are at least 8 female Mongolian golden-eagle hunters. 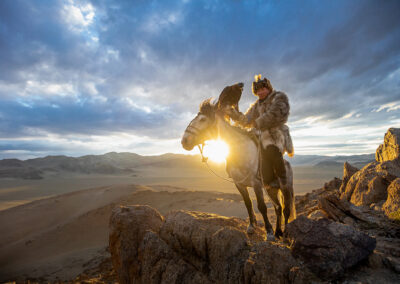 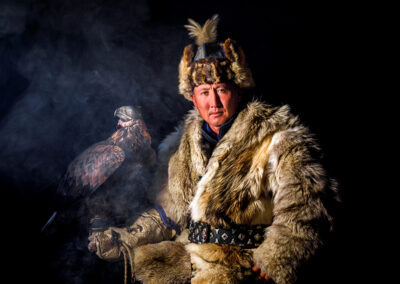 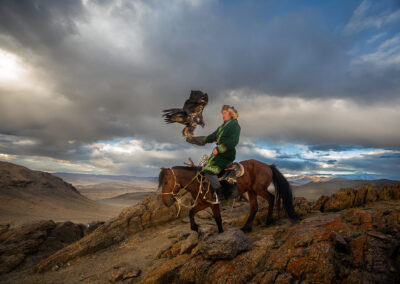 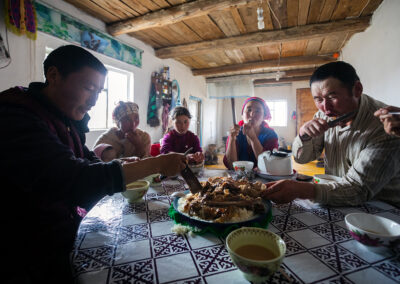