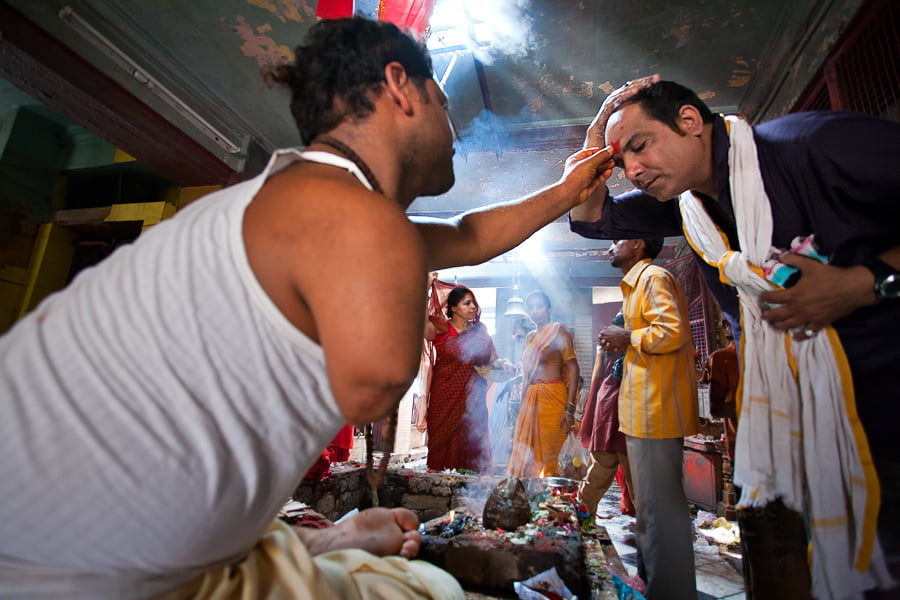 Mark Twain truly said that “Varanasi is older than history, older than tradition, older even than legend, and looks twice as old as all of them put together”.

Varanasi is also commonly known as Benares or Benaras and Kashi, a city on the banks of the River Ganges in Uttar Pradesh. According to legend, the city was founded by the Hindu deity Lord Shiva, several thousand years ago which makes it one of the most important pilgrimage destinations in the country. It is regarded as a holy city by Hindus, Buddhists and Jains. It is one of the oldest continuously inhabited cities in the world and the oldest in India.

Enjoy the spirit of Varanasi here….

In memory of the forefathers

He came all the way from Kathmandu, the capital of Nepal, to Varasnasi to bring homage to his deceased ancestors, like so many Hindu from all over India, believing that after death, the soul given to the Goddess Ganga, remains in the river of life and death.

Sun Rise on the Ganges.

Early morning pranayam on the Ganges.

A priest at Varanasi.

A Sadhu at Varanasi.

Pradeep Kumar Dwivedi, the priest of the Shitala Mandir at Dasaswamedh Ghat, Varanasi is one of the few survivors of a tragic bus accident on 3rd June 1996 morning where more than fifty people were killed. Four people are still in coma. In that accident he lost one of his hands. As the time passes by he realized that he was being neglected by his family as he became physically challenged due to that tragic occurrence. One day he told his father that hell earn himself and he came to Varanasi. When he came to Varanasi he fell in love with the ancient city.

Boating on the Ganges

A fortune teller on the Ganges at Varanasi.

A priest from Varanasi.

An old woman at Varanasi.

Puja on the Shitala Mandir.

Puja on the bank of Ganges.

Burning Ghat on the Ganges at Varanasi.

Few days ago early in the morning one mobile call from Varanasi really shocked me for some time. Only four words Sir Kiran mama chale gaye (Kiran uncle is no more). Though I was getting ready for my office but couldnt control myself and sat on the couch for an hour. He was only 65 ! Kiran Chowdhury, the famous Doma (A Hindu caste whose duty is to burn the dead and look after the crematorium) of Varanasi is no more ! Though hell not burn bodies anymore but therell be burning all the time. From now bodies will be burnt without his touch as he burnt to ashes. During my last visit to Varanasi we had a long discussion regarding Hinduism and Karma. That day once again I realised that wisdom doesnt come from the books always.

Burning Ghat on the Ganges at Varanasi.

Evening Puja on the Ganges at Varanasi.

DURGA BISARJAN on the Ganges at Varanasi.

Evening Puja on Doshomi at Varanasi.

DURGA BISARJAN on the Ganges at Varanasi.

Sondha Aroti (Evening Puja) on the Ganges at Varanasi.

Sondha Aroti (Evening Puja) on the Ganges at Varanasi.

A panoramic view of the Varanasi ghats.

← Making of a Devi Curse of the Modern Technology →